The Army Cadet League of Canada, British Columbia Branch are now accepting nominations for the 2021 Major Charles Whisker Volunteer of the Year Award.

Major Charles Whisker was an active participant in the volunteer community and had a strong commitment to the Army Cadet Program.

This award is open to anyone who is involved and volunteers with the Army Cadet Program. Nominees must have volunteered with the Program for a minimum of 5 years of more. This award is for Support Committee volunteers, Regular/Reserve Volunteers, Corps Volunteers and anyone that is involved with the Branch. Members of the CIC are not eligible as they are recognized by the ACLC BC Branch Officer Sword of Excellence award.

Nominations for this award can come from a Support Committee member, ACLC BC Branch Director,  the Corps Commanding Officer or other Staff Member of the Corps. Nominations must be in an official letter and submitted to the Executive Director prior to 31 Jan 2022.

The letter of the nomination must substantiate the volunteer with specific details of the following; 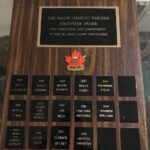