Winner of the ACLC BC Branch Presidents Trophy

Congratulations to Cadet Warrant Officer Emily Chao from the 2947 RCACC in Richmond.  WO Chao has won the ACLC BC Branch Presidents Award for the Top Cadet in British Columbia for 2020.

The Army Cadet League of Canada created the Branch President’s trophy in 2007 to recognize an Outstanding Army Cadet in each province. Some of the selection criteria are as follows: Be a recipient of the Royal Canadian Legion Cadet Medal of Excellence, has demonstrated outstanding loyalty to his/her Cadet Corps, be regarded as an excellent ambassador of the Army Cadet Program, and has successfully completed an Advanced Training Summer Course or in a National Level Directed Activity.

WO Emily Chao enrolled with 2947 RCACC in November 2015. She is Master Cadet qualified and has attended 96% of all mandatory and optional training with her Corps. WO Chao is an active member of the Corps Marksmanship team and Co-Captain of the First Aid Team. In addition, WO Chao maintains excellence in her academic marks and also volunteers within her school community, completing over 400 hours.

The ACLC BC Branch would like to send out a special thank you to all Cadets that sent in nominations for this award. 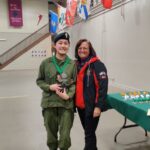