On Thursday April 9, ACLC BC Branch Board Directors-Roger and Louise Prouse placed a wreath at the Cross of Sacrifice at Mountain View Cemetery in Vancouver on behalf of the Army Cadet League of Canada (BC).
The cost of victory at the Battle for Vimy Ridge was costly as over 10,000 Canadians were either killed or wounded in that fateful battle of 9-12 April 1917.
At Mountain View Cemetery there is a section dedicated as a Commonwealth Grave Site where over 360 WW1 Veterans are interned. Every year over 350 Army Cadets, from the Vancouver area, parade at this site on the closest Sunday to April 9 to commemorate and honour those brave Canadians who gave so much for the freedom we enjoy today.
Unfortunately, we were not able to parade this year due to the Corona virus. However, we can all still commemorate the Battle of Vimy Ridge by pausing for just moment to remember our fallen who fought and died for our freedom. 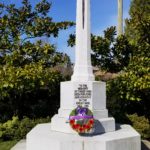 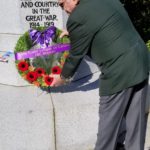