The ACLC BC Branch President’s award was created in 2007 by the Army Cadet League of Canada to recognize an outstanding Army Cadet in each provincial and territorial Branch, thus ensuring a cohesive approach to the Walsh Memorial Sword-The Outstanding Canadian Army Cadet. The Branch President’s Trophy was initiated by Col Gene Lake, a former president of the ACLC BC Branch from 2000-2010.  The Army Cadet League of Canada, British Columbia Branch will recognize annually, one deserving Army Cadet in the Pacific Region that has demonstrated leadership, initiative, mentorship, and dedication to the support of the Army Cadet Program in his/her community.

After carefully reviewing the nominations received, the ACLC BC Branch Honours and Award Committee is pleased to announce-Cadet CWO Nelson Gidney from the 1725 RCACC in Chilliwack, BC is the recipient of the 2021 President’s Award-Outstanding Army Cadet in Pacific Region.

The ALCC Branch would like to congratulate CWO Gidney for his dedication to the Army Cadet Program.

CWO Gidney enrolled with 1725 RCACC in November 2015. He is an active member of the Corps Marksmanship team and volunteer. CWO Gidney volunteers with the Royal Canadian Legion, and the Chilliwack Community Christmas Hamper assembly. CWO Gidney also volunteers with the Snow Angles-a service that shovels snow for people that are unable to clear their driveway/walkways. In addition, CWO Gidney maintains excellence in his academic marks and is a key member of his school’s debate club and the Sardis recreational floor hockey league. CWO Gidney has motivated and inspired his fellow cadets with virtual training during this past training year. CWO Gidney stated that his distinguished discipline, leadership abilities and dedication was developed almost entirely within the Army Cadet Program.

CWO Gidney is the first cadet from 1725 RCACC to be awarded the President’s trophy in the 81 years of the Corps History. 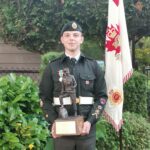 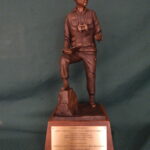